The show that I perform is dramatized story telling where I play the central character, an adventurous princess who just wants to play and have fun and doesn’t want to obey her Mum and who encounters all sorts of characters on her imaginative journey 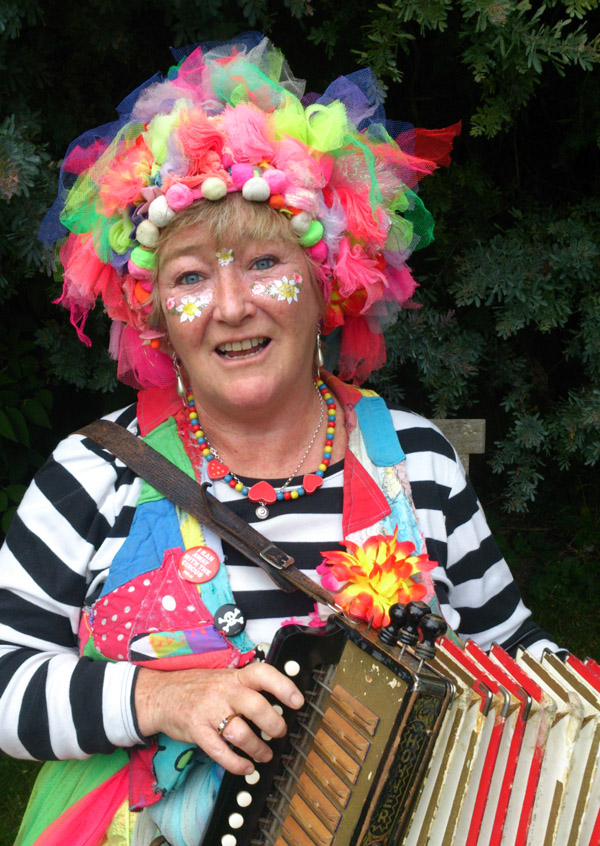 This is done physically using clowning with bits of mime, singing, dancing, acrobatics, slapstick and juggling.  The show is further animated visually using a selection of puppets and objects which interact through the story line.  I encourage active participation from my audience throughout the show offering the children opportunities for involvement, through singing making spells and creating sound effects.  At birthday parties there is always a special moment created for the birthday child to shine (if they so wish) whereby the magic wand only works for the birthday child.

The grand finale of the show involves the children getting up to dance to my fast accordion playing and leads to all the children joining my Banana Band where they get to participate musically playing a selection of percussion instruments.  It is an exuberant and cacophonous end to the show.

Where space/weather permits and at public events where the children might not know each other I will sometimes precede the show with some short ice-breaker games with my colourful parachute which delights and draws the audience in.

The show is suitable for children from 2 to 8 years old and can be expanded or contracted according to age.

I usually request that the children are seated on the floor rather than on chairs as it makes the show more intimate and easier for them to get up and dance at the end of the show.

Over the past 15 years working professionally as a children’s entertainer I have gained a huge amount of experience working in a wide variety of settings from the private; children's birthday parties, communions, christenings, to the public; preschools, schools, special needs schools, summer camps, libraries, children’s hospitals, family resource centres, festivals and community and corporate events.